I read the Divergent series of books by Veronica Roth sometime last year and I really enjoyed them (bar Allegiant; the ending was stupid) and with a huge big-budget film coming out in a few weeks, promotion has gone into over drive. Sephora have got in on the act and have released a nice collection of makeup and nail polish  inspired by the popular first book Divergent.

I had no intention of buying any new makeup for while as I have more eyeshadows than I know what to do with but I was swayed once I saw the collection in person. I’ll also freely admit that I was struck by an acute case of FOMO (fear of missing out) and bought it to prevent any future buyer’s remorse. I’m still kicking myself about that Hourglass ambient lighting palette…. Anyway, on to the review!

The set I purchased is the  multi-piece collector’s kit and it consists of three eyeshadow palettes, a cheek palette, four lip glosses, and a double-ended blush and crease brush. 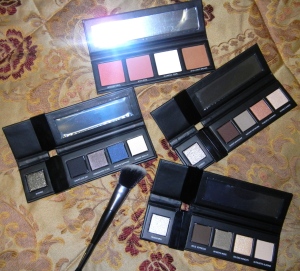 First up is my favourite of the three palettes and it’s the Dauntless palette. The Dauntless are the risk-takers and fearless faction of the Divergent universe and the palette does a pretty good job of reflecting that. It’s a moody palette with darker, cooler, shades with a beautiful creamy highlight colour in serene vanilla. Dauntless ink is a true pure black matte eyeshadow, abnegation stone swatches on me as a cooler version of MAC’s “satin taupe” and the dark greyish taupe is a great every day colour. Erudite sapphire is a dark blue light shimmer with hints of purple but the standout shade has to be diverge. Each palette comes with a “transformer” shade which, according to the blurb, “impart[s] a diamond illusion, shimmery, mirror-like reflection that is transparent when applied dry, and translucent when applied wet, showcasing fluid, twinkling particles that look like they are suspended in air.”

Diverge has a black base with dark olive-green shimmery particles in it and it’s utterly divine. It swatches like silk and it can easily be worn on its own or layered over another shadow.

Best of all, the “transformer” shade can easily be clicked out to carry alone or you can attach it to another palette. Bonus points for creativity! 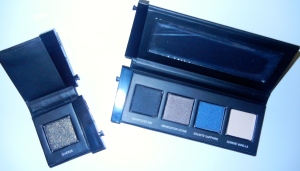